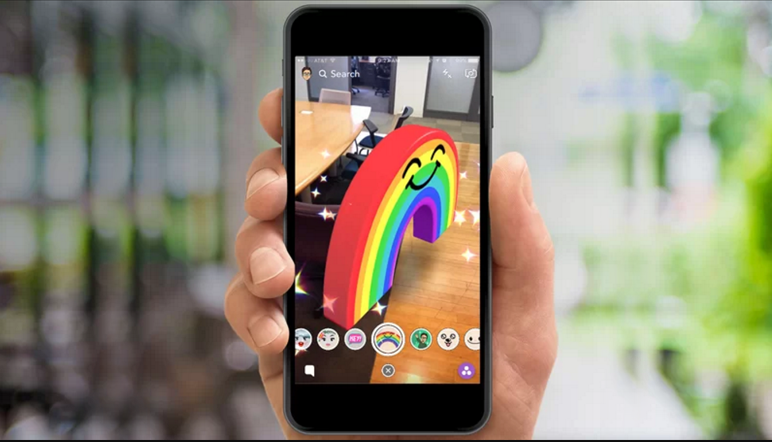 ronysebastian May 19, 2017
With the success of Pokemon Go last summer, many app developers are looking for new ways to incorporate augmented reality into new mobile tech. Snapchat, the image sharing app, recently launched their own improvement on this technology. World Lenses is a new feature that allows the user to enhance photos with 3D images. It places these images into an existing location and the user can interact with them virtually.

Over the past couple of years millennials have been going wild with Snapchat Lenses. This allows users to embellish their selfies with crazy sunglasses, wild eyes, animal ears or rainbow vomit. The company introduced “world” lenses in November of 2015 to allow these effects on photos of anything else, such as pets or coffee cups. Now, the newly launched World Lenses is an augmented reality filter that allows the user to put 3D images into photos of the real world. These elements behave as they actually exist, changing in size or perspective as you “move” around them.

According to techcrunch.com World Lenses is easy to use. Tap the screen to use the rear facing camera and scroll through options. Snapchat plans to regularly add new choices, but for now the user can choose from a cloud, a rainbow, mushrooms and more. Simply move the object to place it. World Lenses is not laid on top of the image, but incorporated into the environment, so the user can also “walk” around it to adjust the size, distance or angle.

World Lenses is often compared to Pokemon Go. This augmented reality game uses GPS to find virtual creatures in real world locations. World Lenses goes a step further in that developers have been able to learn from the glitches that plagued Pokemon Go and make World Lenses work more smoothly.

Apps are a great way to engage your customers. Incorporating the latest in new mobile tech makes your app both unique and practical, so please contact us for more information.